We are now on Facebook! find details of all the latest sequence dance winners by clicking on the link above and LIKE US.........Latest Winning Dances from the ADA event see the competition page ...........Next Inventive dance competition is the IDTA event on 3rd July 2021. The event is online due to Coronavirus. Further information to follow 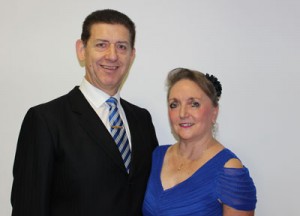 John and Ann Rainey first got together on Easter Sunday 2010 at the Floral Hall, Southport and spoke about entering the Inventive Dance competitions together. They met up a few weeks later for their first practice session and their first competition was the B.A.T.D. event in Aberdeen.

Their first win together came at the N.C.D.T.A event held in South Shields during January 2011. They won the “classical” sequence section with the Southdowne Saunter – this being the name of the hotel they stayed at during their visit to the I.S.D.C. festival at Bridlington.

Romance blossomed and they became engaged in early December 2010. They married in September 2012.

Ann has danced since 1995 and is qualified at both Associate and Membership levels in Classical Sequence and Ballroom branches as well as qualified at Associate level in Latin American. John and Ann run a Sequence dance every Monday which includes the teaching of all new dances at Gargrave Village Hall. They also run a Popular Sequence Dance on Friday evenings at St. Peters Church in Crosshills.