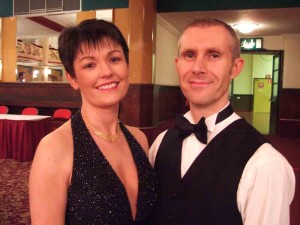 Louise and Robert Aldred both began dancing at the age of 3, Robert training with Joan and Lewis Wilson, Louise competing firstly as a juvenile in Classical Sequence and then as a junior and youth in Ballroom and Latin becoming one of the country’s leading competitors in these fields. Their first meeting was at a dance competition and they were married two years later.

They first entered into inventive dance at the British Dance Council competition at Stoke-On-Trent which they won with the Countess Waltz. This was later to become a Championship dance along with one of their more recent prize winning dances, the Washington Two Step.

They are both Championship Adjudicators and have lectured for most of the Teaching Associations. Robert is a Fellow of both the NATD and ISTD, recently being invited to sit on the Sequence Faculty of the latter.