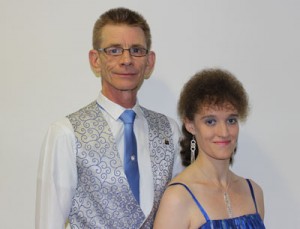 Ray Fenton-Storey and Lissia Giles – Ray has danced nearly all his life and began at the age of 5 with what was then known as Old Time, and first competed aged 8. He started teaching at age 16 and qualified at 17, as an Associate with the IDTA in 1970 and with the ISTD in 1975. Ray was trained mainly by John Knight and Peggy Spencer, with further training when teaching for Josephine Bradley and later Bill Phillips. He has since qualified at Licentiate level in Latin, Classical/Old Time, Freestyle, Rock& Roll, Line Dance and Viennese Waltz and is now a Fellow in Modern Ballroom, with both the IDTA and UKA. Ray is a licensed championship adjudicator.

In 1996 Ray trained two teams for the All England Under-16 Disco Formation competitions where they achieved 1st and 4th places. He first started entering Sequence Inventive competitions dancing with his wife, Bridget, and they had several winning dances including the ever popular Let’s Jive and then Peppercorn Jive. Having worked together for 20 years, in time Bridget needed 2 hip replacements so Ray now dances with Lissia as his regular competitions partner . Ray runs dances where he teaches the latest dances. He also gives private lessons in Ballroom, Latin and Sequence at all levels from beginners through medalists, to coaching competition dancers and training candidates for professional qualifications.

Lissia started dancing at the age of 3 with Ken Bateman, in Slough. Having gained all her medals in Ballroom and Latin she first qualified with the IDTA in 1999, aged 17, as an Associate in Ballroom. Lissia later met Ray through one of the sequence clubs and then trained with him to gain her Associate in Classical/Old Time. She is now continuing with training for her Licentiate in Ballroom. In 2003 Ray invited Lissia to partner him in Sequence Inventive competitions, initially dancing his own arrangements. She then progressed to entering her own dances achieving her first win in 2005, with the Seaside Salsa. Lissia independently runs her own classes in Sequence, Ballroom and Latin.