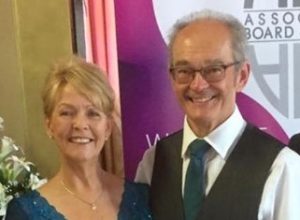 Stuart Perry and Beverly Howard –Stuart started dancing during the 1960’s by going to beginners classes with his parents, which then progressed to taking medals through the IDTA. He qualified as a professional dance teacher with the IDTA in the late seventies.

Beverly started dancing by taking medals in ballroom and latin. This then led to an interest in theory and teaching which she completed in 1996 with the IDTA.

Stuart and Beverly have been friends for many years and decided to enter their first inventive competition together in October 2006, achieving their first win in February 2007 at the ISTD – the Imperial Foxtrot, followed by the ever popular Gershwin Foxtrot and the Amethyst Waltz.

They also run Sequence Dancing Holidays in the UK.